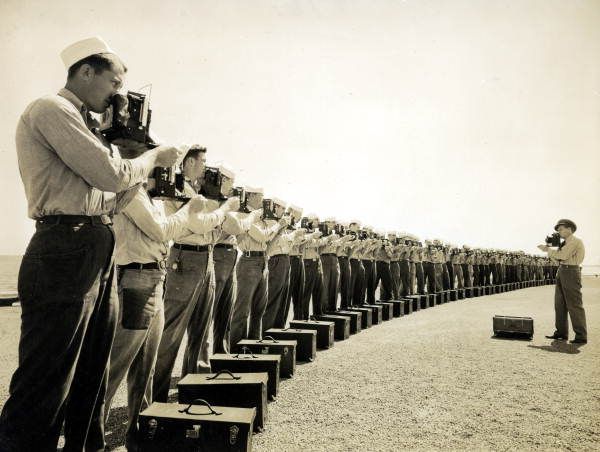 Earlier this week, the U.S. patent office announced that it had granted Apple a new patent. That sort of thing isn’t something I usually write about, but thanks to the runaway success of the iPhone, Apple has become the biggest camera manufacturer in the world — and the patent is for a mechanism to remotely disable phone cameras at music events. It’s exactly the sort of thing that manages to cut through the noise of tech coverage, something fascinating and Orwellian at once.

To be clear: Being granted the patent doesn’t mean that this idea will ever be turned into an actual feature — the company routinely patents ideas it never pursued1

The idea itself nevertheless signals an interesting development: It looks like the reckoning may be arriving for our society full of cameras. Just think of Mark Zuckerberg, who just became the latest (and arguably most prominent) person to cover up his laptop camera. And here in Berlin, you routinely see peoples’ phone camera lenses covered with black electrical tape — not because of the famous German techno-skepticism, but because Berghain, the city’s most infamous club, bans photography.

Those stickers often stay on — not just out of laziness but also because they communicate where you spent your weekend. Cameras are now everywhere. And every two minutes, humans take more photos than ever existed in total, just 150 years ago. The other day, I had a conversation with a colleague about the number of Instagram pictures we must surely be in the background of — simply for living in a big city where people take a lot of pictures. And just as the volume of images has increased, I find that the suspicion of being photographed has increased in the past years.

One would think that we might get used to the cameras surrounding us, but the opposite seems true: People perceive the lenses peeking out of every pocket a threat rather than a new normal. I cannot tell you how many times I have gotten suspicious glances from people who thought I was taking their photo without permission — just for having a camera strung over my shoulder.

More people and institutions want you to stop taking pictures.

It’s a great paradox, really. Mostly thanks to phones, cameras have proliferated to such an extend that much of life is and will be recorded. Like it or not, but the most mundane activities are quickly becoming footage — not just because recording and retaining each moment is so cheap, but also because having a camera is surprisingly useful for many things other than photography.

I have a friend who takes photos of his stove whenever he leaves the house — to have something to check when he inevitable wonders whether he left the stove on and his house is on fire. We communicate in pictures. And the upcoming version of the iPhone’s operating system is shipping with a magnification feature — because people have begun using their cameras to magnify small text.

In the most recent episode of Available Light I spoke about the point when photography moved away from merely depicting things and became art. We have now come full circle: While photography is of course still used for art, it has become much more utilitarian: Photos are a tool to quickly capture some visual impression.

It’s much easier to take a photo of something than to write it down. And for many people — myself included — doing this has become second nature, The Apple patent I mentioned above signals a backlash: Not only do more and more people not want to become unwittingly photographed, some institutions also want to prevent you from taking photos.

At the iconic Bauhaus in Dessau, for example, they charge you an additional fee for being allowed to take photos. And even the lighting on the Eiffel tower, which comes on at night, is considered a work of art and therefore not supposed to be (commercially) photographed. I am sure there are many artists and venues who would prefer audiences to keep their phones in their pockets, listen, and enjoy the show. To not give away songs before they come out, not violate any intellectual property by putting footage on YouTube.

Recently, sports fans have begun broadcasting big games live from the stadium, effectively circumventing the big broadcasters. Sure, the quality of their phones doesn’t measure up to television, but a hardcore fan would much rather watch a shaky live stream than miss out on a game altogether.

So however limited and theoretical Apple’s idea may be at this point, it is unsettlingly logical: At the behest of certain institutions, the company could disable cameras on phones while those are within a certain area or geofence. As part of a smart device, the phone camera is essentially a piece of software — and with perpetual internet connections, cloud technology, and unique device identifiers, it doesn’t require much imagination to see this working out, technically.

New norms, once the dust settles.

The implications are, of course, chilly. Not only for having part of this very personal device tampered with remotely, but also for what it could lead to — because that technology might end up in all sorts of hands. In a world where cameras can be disabled, would the girlfriend of Philando Castile have been able to broadcast their plight to the world?

Would airports, already a bastion of safety and paranoia, be off limits for phone cameras? This is one of those cases where a technical solution seems like a quick fix, is reasonably easy to realize, but creates more problems than it solves.

As a society, we need to come to terms with the proliferation of cameras that are connected to the internet. We need to adjust our exceptions to accept they are there. We need to be mindful of other peoples’ privacy when photographing, need to teach others to do it — and use the cameras we have sensibly.

As photographers, this responsibility is on us: Show the world that their skepticism is unwarranted. And we need to rethink what intellectual property means in a world where images are infinitely reproduceable and can be shared without friction.

Analogue photography may be mostly gone, and having grown up with digital photos, I recognize the advantages of digital images, their ease, share-ability, and disposability. But I do sometimes miss how analogue photography forced us to be deliberate. I am confident it is an ability we will regain, once the dust of the digital transition has settled and we have established new norms around it.

Come to think of it, deactivating cameras is akin to unplugging your child’s PlayStation rather than talking about when it makes sense to turn it off.