In an interview on the great “Song Exploder” podcast, the singer of The Long Winters, John Roderick, comments on the cryptic lyrics of “The Commander Thinks Aloud”:

Most of The Long Winters’ songs are (…) intentionally difficult to parse because they are meant to communicate in an emotional language rather than in a literal language.

Since February, I have been plowing through Robert Bolaño’s 2666, a 900-page novel. It is an incredibly ambitious book, spanning five different storylines, the globe and the 20th century. And while that may seem like a lot, Bolaño keeps at it with an incredible pace and a sense of urgency that keeps me glued to the pages — unless I put the book down, stunned by the intensity of the writing and the emotions it stirs.

Take this passage about a young soldier named Ansky, who is talking to a recruiter of the Red Army in order to enlist: 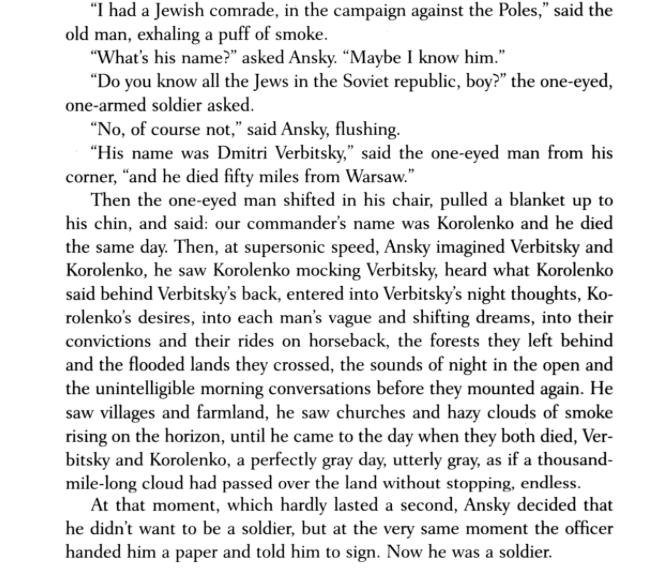 The author manages to write about nothing and everything at the same time. While there is something resembling a storyline, it meanders from character to character, taking detours and dwelling on things that have very little to do with the actual plot.

Bolaño draws analogies that are crazily far-fetched, makes comparisons that seem to have come to him in a fever dream, and qualifies his own writing by frequently calling previously stated facts into questions. I can see that some people would find this unnerving, random even, because it often doesn’t make any factual sense. But in an emotional level, it cuts deeply.

What Roderick says on the podcast makes clear to me why I find Bolaño’s writing so exhilarating: Even the most cryptic passages can make all the sense in the world if they communicate on an emotional level. And for (fiction!) writing to transpire the mere factual, to use the construct of language to go beyond the descriptive and tap into something much deeper: That, to me, is art.