I enjoy looking at the world through the prism of photos, and US presidencies offer a lot of iconic ones. Take this picture of Nixon’s last lunch before resigning: 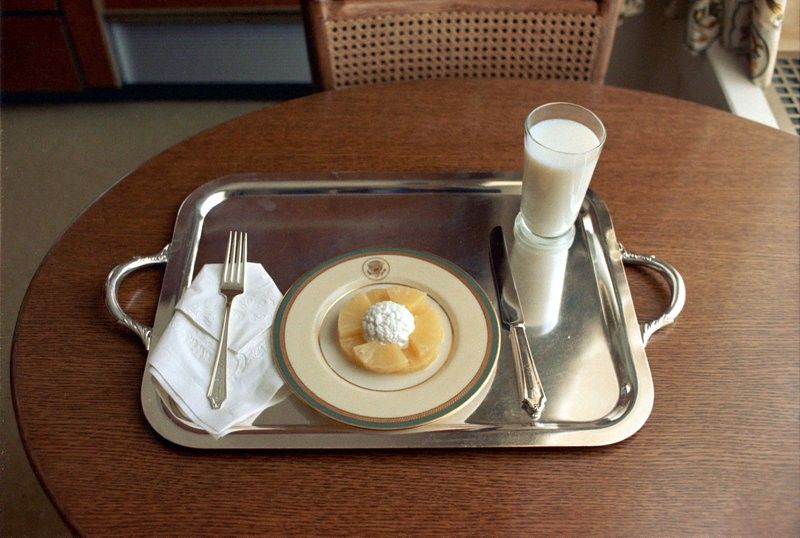 It’s a surprisingly intimate capture, mostly because it leaves so much to the imagination of the viewer. Here’s a plate of food, an obvious product of its time, and we’re left to ponder Nixon’s thoughts as he sits down, presidency in shambles, to drinks a glass of milk.

Another shot I like was taken during the Truman administration. It shows the White House completely gutted during a major renovation. The stately home, the picture seems to imply, is just a facade, with everything else down to the support beams in constant flux. 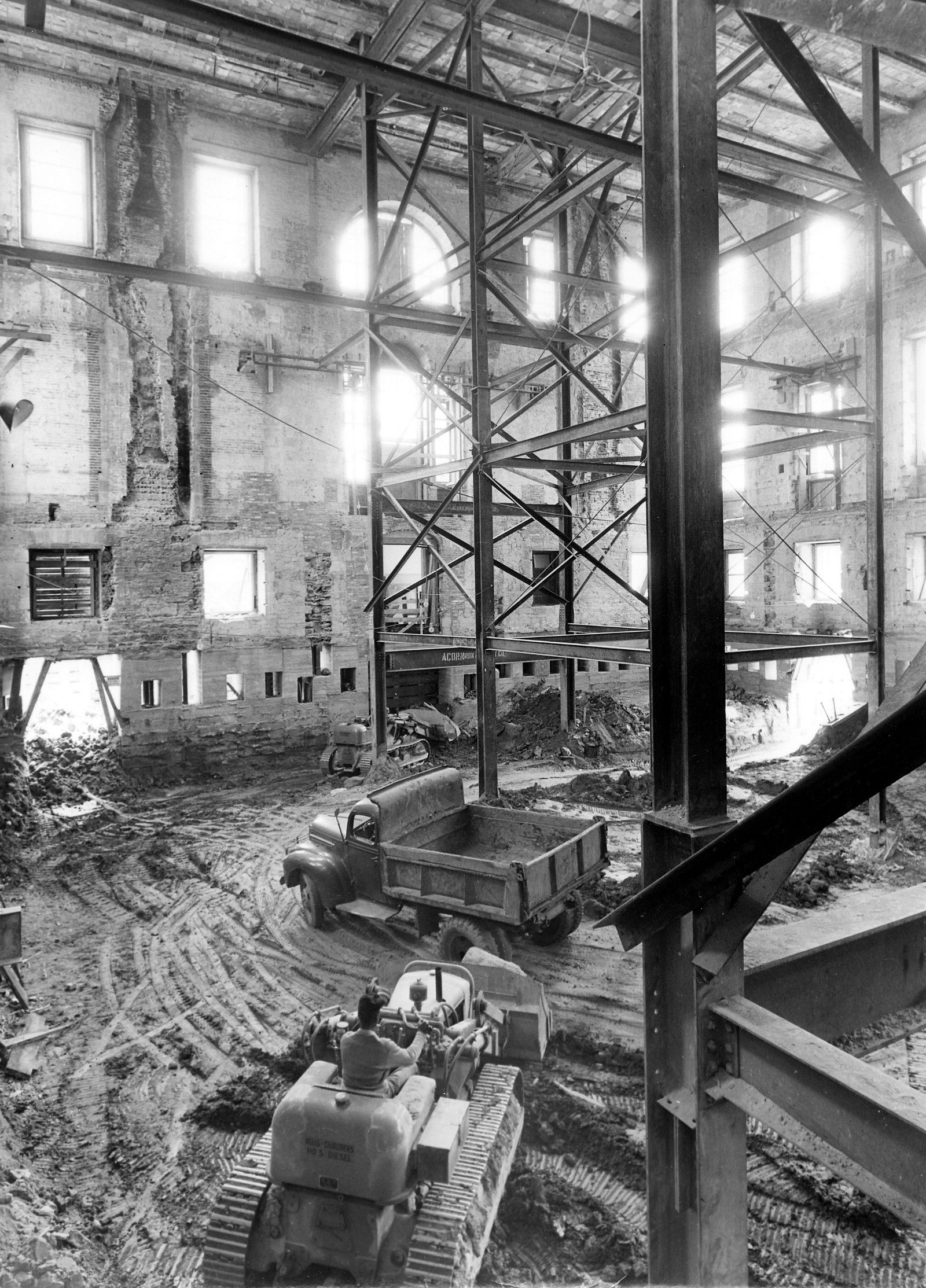 U.S. presidents are as much media personalities as they are politicians; their coverage is carefully orchestrated. That’s why these little glimpses behind the curtain of the presidency are so revealing, and why they used to be so hard to come by.

Until the Trump presidency.

What we’ve been seeing over the past five months, at least to my eyes, has been a perfect storm of revealing photographs. Photos that barely leave anything to the imagination, that are startling in their clumsiness. Take today’s image of Trump posing with regional leaders in Ryadh. It’s a photo that makes you wonder how anyone involved would consider it a great idea: 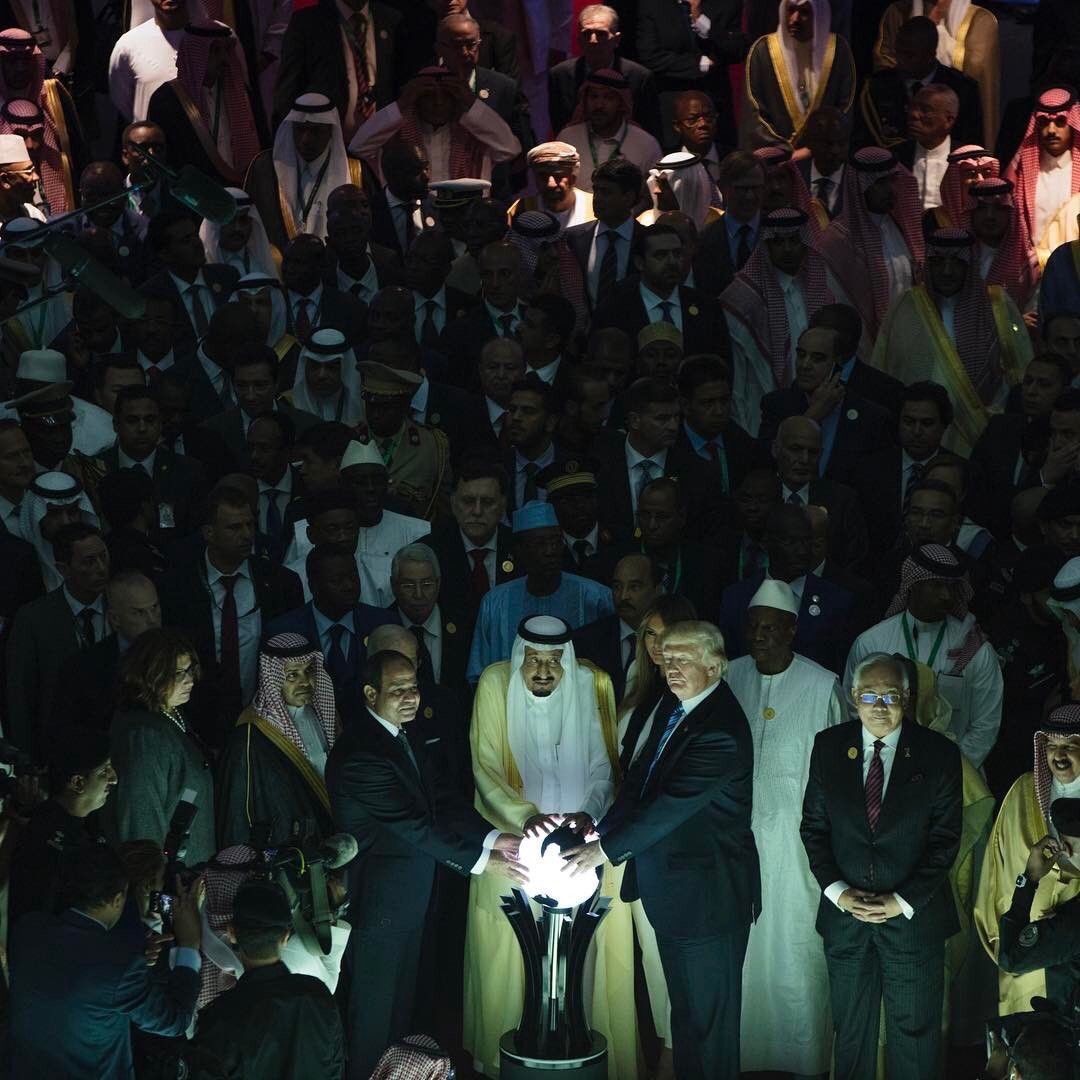 Focus just on Trump, Sisi, and King Salman in the center of the frame. They are isolated by the lighting of the picture, huddled around the oddity of the glowing orb, with the rest of the room plunged into darkness. This picture is about them, it is about power, meant to signal unity. But the three central figures look terrible: King Salman appears frail and old, as though he was leaning on the glowing orb for support. Trump’s eyes are lit up by the light, making him seem like a wax figure rather than an actual person. And Sisi, albeit looking the most normal of the three, sports and expression of creepy determination.

This photo is very, very strange, and it perfectly encapsulates the absurdity of Trump’s presidency. But it’s really just the latest weird shot of Trump’s Horror Picture show, which began the freshly-minted candidate riding to his announcement speech on a golden escalator.

No wonder we can’t look away

Think about the empty streets he walked through during inauguration. Think about his stern expression when signing his first executive orders, an expression turned into countless memes. Remember the staff: The men surrounding him as he signed away US financial support for women’s health. a or that photo of Kellyanne Conway kneeling on the sofa. Remember the President’s own pictures, gleefully shared on Twitter. The smiling selfies. The odd photos on his official account, with captions that will make any designer cringe.

To be fair, all these pictures are individual oddities. Some of them are funny, some blown up into disproportionate media spectacles, fodder for a public eagerly waiting to be horrified. But zoom out and look at those images together: You see a tapestry of absurd photos, terribly-executed attempts at seeming presidential. We’re only a few months into this presidency, but it’s clear that while Trump may care about optics, he certainly doesn’t care about visuals.

In the light of all that’s been going on, it seems petty to focus on the President and his staff having bad taste. But I believe that photos matter, that they are one of the ways how we make sense of the world. These pictures of Trump are as odd as his presidency, as careless as his statements, and oftentimes as ugly as the vindictive ideology underpinning the man’s ascent. No wonder we can’t look away.